Mermaids on the Moon - A Story Behind the Story

Believe it or not, for a long time I resisted setting this novel in Florida. Shortly after I moved to Tallahassee, in the fall of 1999, to teach at Florida State, I began working on a novel set in Indiana, where I’m from, about a thirty-something woman–France–who’d set herself up to tell fortunes with her psychic cat, Sisterwoman. France’s mother goes missing and then one day her father’s mistress comes in to get her fortune told by Sisterwoman…

While still in the early stages of writing the novel I had the great good fortune to visit Weeki Wachee Springs, a theme park in central Florida, with my friend Lu Vickers, who was writing a non-fiction book about Weeki Wachee. While there I met some older mermaids who’d all been Weeki Wachee mermaids back in the 50’s, 60’s and 70’s. They had returned a few years earlier for the attraction’s 50th anniversary, been bitten by the bug, and were now performing again. They called their show “Mermaids of Yesteryear.” Their half-hour performances were staged underwater in a clear, gorgeous spring, while the audience watched through huge windows in an underground theater. While underwater, the mermaids used air hoses to take breaths now and then, performing beautiful balletic movements as well as zany antics like drinking Coke and eating bananas.

I found the place, the shows, the mermaids and their stories about the glory days fascinating. I returned to the park a few times with Lu, went back with other friends, and took my family there a few times, each time meeting and talking with the “merhags” as they called themselves, learning more about the history of the place and the way the mermaids perform their strenuously athletic maneuvers. I read countless articles about Weeki Wachee and went to the Florida History Museum so I could watch archival videos of old shows when mermaids and mermen performed underwater with elaborate props and costumes – an outdoor barbecue complete with grills and hot-dogs, Santa riding past a fully decorated Christmas tree in his sleigh….

By this time I was more than hooked, and I decided to make the mother in my novel a former mermaid who is performing in the Mermaids of Yesteryear shows at the time she disappears. I didn’t feel like I could tell the story from the perspective of a native Floridian, but France was from the Midwest, so she could come down and see the place the way I saw it. I changed the father’s mistress from the earlier version of into a sassy young mermaid and assembled a cast of imaginary merhags who could further the plot of my novel. While at the Florida History Museum I’d stumbled upon a video of a mermaid show called Mermaids on the Moon — loved the title, but the show was boring as all get out – just a woman pretending to steer a “spaceship”. I adopted the title and choreographed my own show.

While I was working on the novel, my older daughter, who was four, was diagnosed with Asperger’s Syndrome, and we were all attempting to deal with, and understand what this might mean for our family. So I gave France a nephew with undiagnosed Asperger’s Syndrome to look after, and writing about her experience– wondering what on earth is going on with her nephew — allowed me to explore my inexperience with my daughter. This turned out to be a true gift for our whole family.

Last but not least — Elvis visited Weeki Wachee in 1962. When I saw pictures of him there, I knew he had to figure into the novel somehow. Unbeknownst to me, this was the beginning of a full-blown Elvis obsession – what began as an ironic interest in the King gradually became unabashed admiration.

But that’s another story. 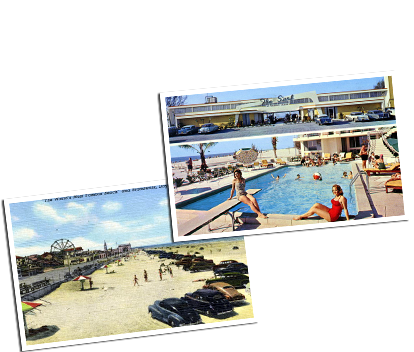